CHANGE: FRIEND OR FOE? a Bit of Philosophy and a Case Study

Change is a constant.  It often affects every part of our professional and personal lives.  We can fight it, accept it, or reshape it to our advantage.

New and less experienced professionals are often thought of as the harbingers of change. They are quick to propose it and seem most comfortable dealing with it.  But the experienced seasoned librarian has the track record and experience to be the optimal agent of change.  They have experienced many new, experimental, and innovative changes.  They have encountered and implemented a wide variety of job modifications, new tools, and changes in work environment and critical behavior traits necessary for client satisfaction and their own success.

The veteran librarian has experienced both positive and negative changes.  At times, changes may seem as only for change’s sake, but there have been opportunities to both revel and relish in the improvements to the benefit of the employer and the employee. As they have experienced change at the ground level, because of their wider, deeper, and broader experience, they can view change from the thousand-foot vantage point.  Therefore, they may be in the unique position to most adequately evaluate change from a risks-benefit point of view and weight the return on investment of the change.

I struggle with change. Every day for two years, I posted a quotation about change on social media.  This case study is evidence of some of the lessons learned.

I found that nearly every subscription and every publisher agreement ended at a different time, which caused unnecessary work for accounting, difficulty in budgeting, and negatively affected the ability to substantially change the number of publishers and coverage of the subscriptions.

Having worked in law libraries in New York City for more than thirty years, I was given the challenge (or exceptional opportunity) to substantially change the variety and depth of database alternatives.  Historically, librarians review and adjust contracts when the database individually expires.  Generally, librarians renegotiate database contracts one or only a few at a time.  But why isn’t it possible to change this construct to determine all the database contracts at one time?  Before I began, I reached out to many librarians describing the proposed plan and was counseled that there was too much work to be done at the same time, and there was too large of a risk of messing up.

But after 30 years in this career dealing with disruptive changes that were positive and beneficial to the firm, I decided to take chances, make mistakes, and get messy.  This case study describes that nine-month process from initial seed germination to fruition, highlighting the methods and procedures used to assist the librarian in their step by step road to revise nearly the entire library budget.

Key activities included developing a comprehensive timeline, fully describing the benefits and possible cost of trying to renegotiate every database contract at the same time to the senior management of the firm and library committee, and then gaining their approval.  Complete agreement was reached about the journey that we were undertaking with the understanding that the destination and final conclusion was completely unknown.  Similar to zero based budgeting, no database was safe nor any vendor relationship secure.  Everything was on the table to be examined and justified based upon current actual articulatable need.

Part of the process was selecting members of the focus/trial groups, working with each practice group’s library liaison, organizing training sessions with individualized evaluation forms designed for each practice group and for each database, collecting patron preferences, meeting with each group to make sure that the proposals are workable for them, and working with vendors and stakeholders to negotiate new contracts.  To their credit, those faced with the proposed changes rose to the challenge.

In the end, we reallocated the firm’s resources and added both new databases and a new membership. We engaged in very strenuous pricing negotiation, saving the firm substantial amounts of money with greater database access.  Ultimately, the project benefited the firm’s clients, as it guarantees the lawyers have the right set of resources to optimally handle their work and keeps the firm’s overhead expenses at the lowest point possible. This will ultimately benefit the client by minimizing the fees charged.  We also had an intellectual property attorney at the firm review the contracts, and he proposed alternative language.  He was successful in working out compromise changes in nearly every database contract to better protect the firm.

An extensive amount of live group in-person training, live webinar training, web video training on demand, and individually scheduled personal training sessions focusing on the effects of the changes were conducted.  That comprehensive and exhaustive training also helped to identify a few potential bumps in the road and allowed us to compensate to handle the situations before they manifested as problems.

It was an extraordinarily hectic nine months, filled with great stress and pressure to produce the best outcome possible.  Exhaustive and continuous feedback from patrons continues to be gathered to monitor whether all the users’ needs are being fully met.  In the end, this project also proves that the Library is the best actor to be responsible for negotiating vendor contracts.  We know our patron’s needs, the ins and outs of all the possible resource alternatives and can balance the various advantages and disadvantages of each vendors’ offering with their relative cost.  Looking back, we see positive changes showing real benefit to the firm by helping the firm’s bottom line, and ultimately the clients. The firm was able to reduce overhead, streamlined administration, reduced the number of invoices handled, and checks processed.  All indications point to the result being a huge success.  Ultimately, only time will tell whether the optimal decision was made, or whether in the end too many chances were taken, and we got too messy.  But without creating and embracing change and the previous thirty years of taking chances, making mistakes and getting messy, we would not have taken on this difficult task, and we would have lost out on this unique opportunity for success.

Humanity has always struggled with change from ancient times [Ecclesiastes chapter three[iii] (“To everything there is a season”)], to more recent times as illustrated by the popular folk song, The Times They Are A Changing.[iv]

One can love it, hate it, initiate it, resist it, but nobody has the luxury of ignoring it (or at least not while they are still breathing).  The only time we do not have to continuously confront change is when we are dead and buried safely under six feet.  Until then we are forced to face the challenge that change presents.

Just as popular business literature has created the meme that describes the Chinese word for crisis as a combination of the characters for danger and opportunity,[v] so too we must view change as an opportunity – one which presents us with a chance to get ahead of the curve and ride the wave rather than drown in the deluge.

Experience can provide us the context and strength to make changes as having gone down the long and winding road”.[vi]  We may have developed the vision to look at the big picture, the thick skin to withstand the pricks of doubt, the steadiness to move forward in the long haul, and the awareness that this too shall pass (whether the change is a great success, incremental improvement, not useful, or even a disaster).  By having experienced a panoply of changes in our career, we can be willing to move forward, even when the risks are high, and the stakes feel immense.

Remember The Gambler’s[vii] refrain that the secret to surviving is knowing when to hold ‘em and when to fold ‘em, when to walk away and when to run.  Knowing when is a skill built up by experience, time and effort, so that having played many hands over many years, we can be in the situation to make the best decisions based upon both the most current and historical evidence and using the insights born of taking chances, making mistakes, and getting messy.

We should follow the path of Ms. Frizzle and gain the wisdom born of pain,[viii] by paying the price to gain the experience to make better decisions, provide improved service, and become all we can be as professionals. So try to accept and embrace change, stretch your skills, and start down the long and winding road.

[i] Manager of Research & Knowledge Services, Herrick, Feinstein LLP.  Nathan has been a law librarian in New York City for the last 35 years having worked in number of law firms, a legal department in a corporation, the library in an investment bank, a public library, a university library, and a law school library.  He is a member of the bars of the U.S. Supreme Court, U.S. Tax Court, & Missouri State & Federal courts having earned his law degree at the University of Missouri at Kansas City and his master’s in science from Columbia University School of Library Service.  Nathan has published more than 200 articles in the areas of library management and research.   www.linkedin.com/in/nathanrosen, Twitter @nathanrosen, nrosen@herrick.com, 212-498-5505.

Most Popular Stories of 2019

In keeping with the tradition of publishing a New Year’s list that highlights the most widely read stories of the prior year, here is our listing of the top stories that appeared in Librarian News in 2019.  What do you suppose it says about the libraries of the future that by far and away the most read item was about Maintaining Connections in a Virtual Library?

Casetext keeps leading the way by introducing powerful new applications of AI in the legal research market.  This week they announced the roll out of CARA Patent, a new product that leverages the power of AI technology to transform patent law research. 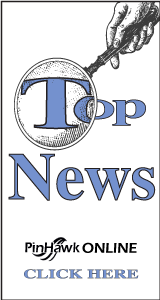 The requested URL /full_newsletters/lawlibrarian_commentary_2023_02_03.html was not found on this server.